From Racing car driving to everyday journeys, the abilities of race-craft and road-craft do have the same fundamentals at heart. Learning to develop car control and educating yourself to vehicle dynamics are the building blocks to become a better and safer driver.

Some of us grow up from a early age around cars and it is breed into us from our parents. Others are late bloomers and stumble across the addiction to the automotive passion later in life. But one thing seems to bring us together to the same conclusion, we love the pleasing aesthetics and beautiful lines,the curves of the cars and the way they make us feel, when a sleek sporty car drives by. The thrill and rush of speed why driving, the feeling of being alive when we push the car to it's limits. Clinging onto adhesion on a fast corner at maximum G-Force.

Even the smell of a car or the aroma of a brand new interior, is a pleasing experience. Not to mention the roar of thunder, a high performance engine and exhaust note transmits, making the hairs on the make of the neck stand up. The smell of gasoline in the air filling your lungs can easily spark memories of these exotic machines even when filling up your car. When all the senses are stimulated and all fired up with our passion of cars, there is no better feeling then when Man and Machine become one.

Through out the following sections I would like to cover the basic car dynamic tendencies and the fundamentals of what car control consists of. Both can be used in road-craft situations and race-craft driving, but due to the nature of experimenting using different driving techniques. We strongly suggest you do not try to practice these skills on public roads and use a Skid pad or racetrack to minimise the dangers to you and others around you. 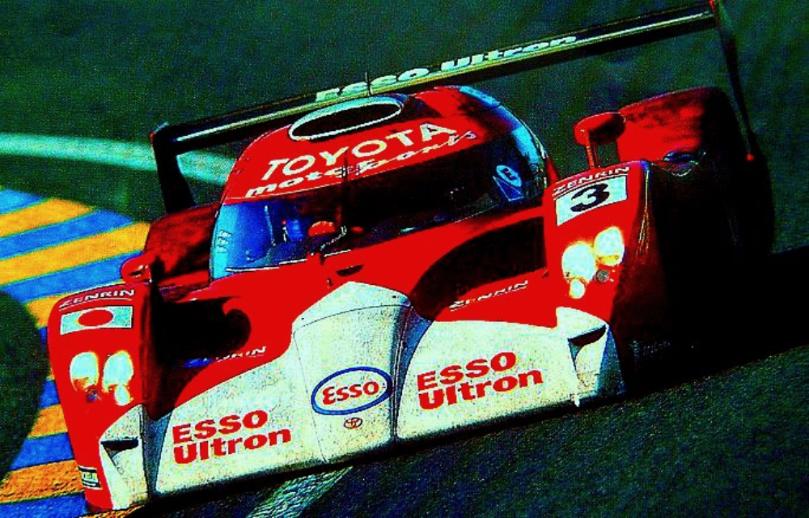 When we are driving in everyday life, we might use 40-60% of the car's potential abilities. Keeping some in reserve just in case and of course keeping with in the rules and regulations. But in extreme driving situations and on the edge of the limit, we need to use this reserve to get the most out of what performance the car has available. This takes practice and a understanding of what is happening and how to influence the car's reactions to your inputs.

In terms of Road Safety having the ability to use all of the car's performance is a good thing and in Motorsport the difference between last and first place could come down to less then a second.

By educating yourself of the performance envelope of certain car's, we can learn about the dynamics at the limit and maximise 100% of what the car has to offer. This gives us more control and makes for a safer and quicker driver.

By using a combination of the throttle, steering wheel and brakes while driving; we can learn to understand how the car's dynamics can change and what is needed to adapt to a given situation.

Learning to counteract the symptoms of the vehicle at the limits we can start to cure the causes of handling extremes. Also having the ability to use gently inputs can lead to a smooth and controlled driving style , but some of the greats have had their own style and use more aggressive movements with the controls. Ultimately people are different and what works for some does not guaranteed success for somebody else.

On the limit it is said a car can be described to act in 3 different driving states, normally the car will be set-up to favour one of these but it is not uncommon for a car to experience all three at different degrees as the vehicle is approaching the limit. These states are what are known as understeer, oversteer and natural handling- we will look at these later as it is best to cover some of the fundamentals first. 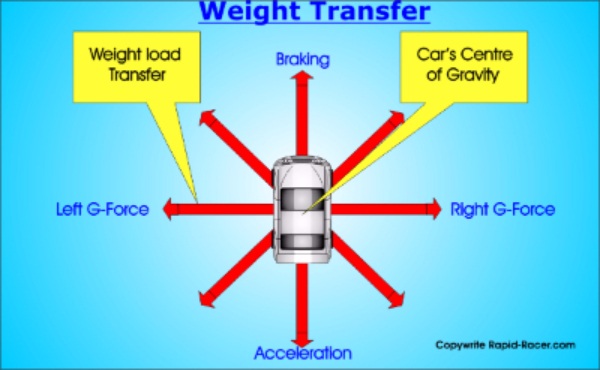 During a cars directional changes when turning from left to right or accelerating and braking (even a combination of both), the weight of the vehicle from it's centre of gravity will shift through the various axis's.

We can use devices to help us control weight load transfer to increase the car's performance, for example using Roll Bars/ Sway Bars will help control the car's body movement. Otherwise we could have a car which wobbles from side to side in the corners, which ultimately reduces cornering force as we need tyres/ tires with equal loads for maximum performance.

Also the same effect can be seen when accelerating hard (weight transfers backwards) and trying to turn a corner. The result of the weight being taken off the front tyres/ tires reducing front end grip and inducing Understeer characteritics. If the intended path while driving is a straight line, then this longitudinal transfer does increase rear end grip and aid acceleration.

Depending on exact suspension system set-ups and drivechain characteristics, fine tuning can be made to maximise the desired performance envelope. But generally speaking having a car set-up to provide smooth, gradual and controllable dynamics will result in a car which behaves better on the Limit and will be easier to control over a sustained period of time. 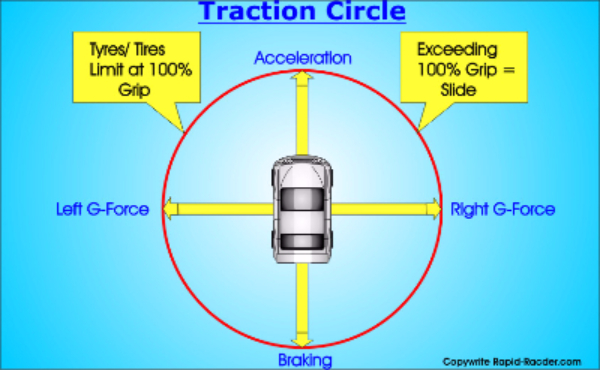 The Traction Circle is a dynamic way in which the car's tyres/ tires interacts with the road surface when driving. It is a easy way of teaching people the limits of the tyres/ tires on the road, which ultimately determines the overall performance of a car.

If you imagine the circle above which is divided between the Cornering G-Forces of the tyre/tire ( left to right) and the Braking and Accelerating forces ( Bottom to top). You can see that a car can only perform 100% of each required force, under normal driving conditions it would normally be a combination of two at a time. For example if you were to brake while turning into a left hand corner, you might be using 80% Braking force and have 20% left G-Force to turn the car.This Traction circle helps explains why if your using 100% of braking Force to slow the car, the Tyres/ Tires will have no remaining traction to turn the car. So traditional Racecraft teachings have suggested that you get your braking done in a Straight line, use maximum G-Force to turn to hit the Apex, then Accelerate away. But this is not normally the case and gentle transition from one phase into the other is normally the best, using a combination of the forces involved. Then again it comes done to the Road or track conditions, the vehicle being used and the style of the Driving applied.

When 100% grip is exceeded while driving, the tyres/ tires will slip and begin to slide. This could be the desired effect for Drifting when using a combination of Left/Right G-Force and the Throttle Pedal, but these car are normally set up to react well to exceeding the limit. A highly strung Race Car, entering a corner too hot might have more violent reactions and snap into a spin.

On another note Understeer, Oversteer and Neutral Handling are three characteristics experienced during load transfers and for simplicity. I would like to set an example to help explain them. But bear in mind due to the diverse nature of the set up of engines and power delivery in different design configurations, some car's will act differently then others.

Imagine for a second you were in a deserted carpark or skid pad, with no people around and no obstacles to hit. If you had a constant speed of say 30 mph in a constant radius circle, with say the steering wheel at quarter lock to the Right. Hopefully the car would hold the line and this wouldn't use too much of the available car's grip limit. While driving, below are the 3 states in this situation, Natural, Understeer and Oversteer handling. 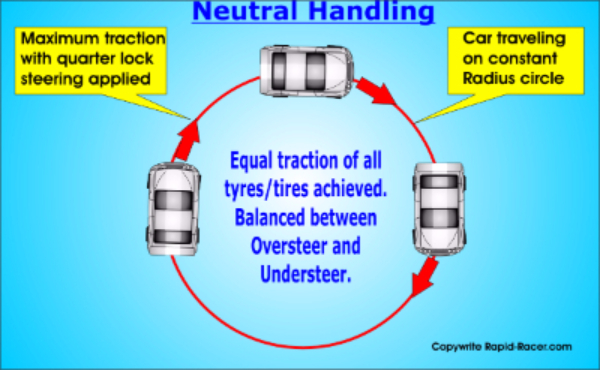 Lets say with the illustrated scenario here, we increased the throttle and the radius of the circle would naturally increase and the car's tyres/tires would reached their maximum of 100% traction holding the line. If both the front and rear tyres/tires were contributing equally to the cornering force (sometimes happens in real life, but not very often) this would be classed as a Neutral Handling set-up car. During this state the car is balanced and easier to control- especially on the limits.

It is said that a car with a MR (Mid-Rear wheel drive) would typically reacts in this way, but again this is just a generalisation. This Neutral set-up is viewed as the most potential for cornering stability for sports like F1 and single sitter racing series, as the weight can quite evenally distributed and on all four corners and sharing the cornering loads.

If a car has these handling characteristics under extreme driving situations then you will most likely have a great set-up, but as mentioned earlier normally a car might experience all three handling states during different car dynamics stages. Understeer on Turn In, Neutral Handling on the Apex and Oversteer on the corner exit. 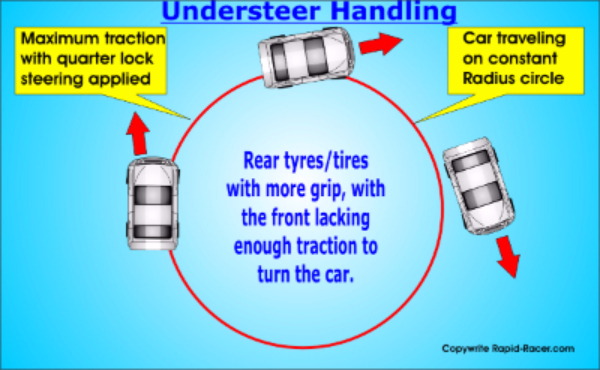 Ok back to the 30 mph constant radius driving circle scenario, if the car again increased the throttle and a wider circle will be produced.

But this time the front tyres/tires of the car reached the traction limits available first and the rears still had some grip in reserve left. We would called this Understeer and if we increased the throttle pass the limits of the tyres/tires even more, the car would have a tendency to push straight ahead and not turn in. Basically lacking the available grip to corner due to the throttle application- the front tyres/ tires have exceeded available grip level and plough forward.

Instead of the car keeping to it's projected line, even with further steering wheel inputs asthis would be pointless- the car would continue to lack the grip to turn the car. Only by releasing some of the throttle can the tyres/ tires regain grip. By the way this could also happen entering a corner under extreme braking, or exiting under acceleration.

While this is not a good situation when we are turning into a corner, this is not an all bad situation when exiting a corner and unwinding for the straights. Understeer is normally associated with FF ( front wheel drive) cars and widely adopted by the motor industry as the easiest and safest handling characteristic for everyday use. Our natural tendency to release the throttle when things go wrong- favours understeer recovery methods. 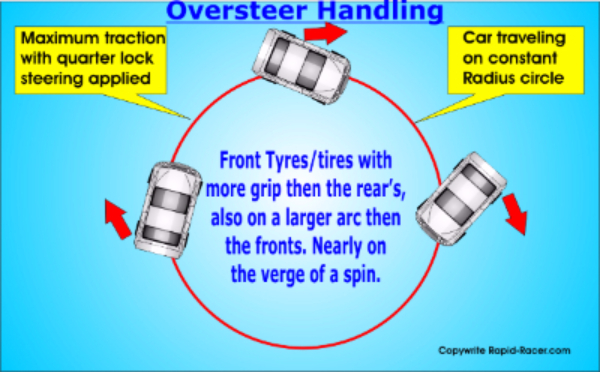 Lets now look finally at what would happen in a car in which the rear lost grip first while driving, referred to as a Oversteer Handling. This could be said to be the opposite of Understeer, with Neutral Handling being in the middle between the two. What is effectively happening is that the rear is on a larger arc turning circle that the front- which has more grip.

Back to the constant radius driving circle in the other example, when we continue to add more throttle. The car will now turn more and more, with the rear of the car beginning to want to swing around the front tires/tyres. More and more throttle will result in a spin at the extremes- also sudden release of the throttle will have the same effect.

Opposite lock and gentle throttle feathering will be required to balance the car and stop a spin. Oversteer can have numerous causes for example:

Normally FR (Rear wheel drive) cars have this handling tenancy and is the desired set up for most Motorsports as well as Drifting. Oversteer when entering a corner can lead to a car with great turn in, but excessive use will result in a spin when the limit is exceeded.

Racing In The Rain