There are a number of different types of car engines in today's road and racing cars, and the number is growing especially with emerging technologies like Hybrids and electric motors start to become even more advanced.

Most traditional cars these days use what is called a four-stroke combustion cycle to convert gasoline into kinetic motion. This four-stroke approach is known as the the Otto cycle, in honour of Nikolaus Otto who invented it in 1867. 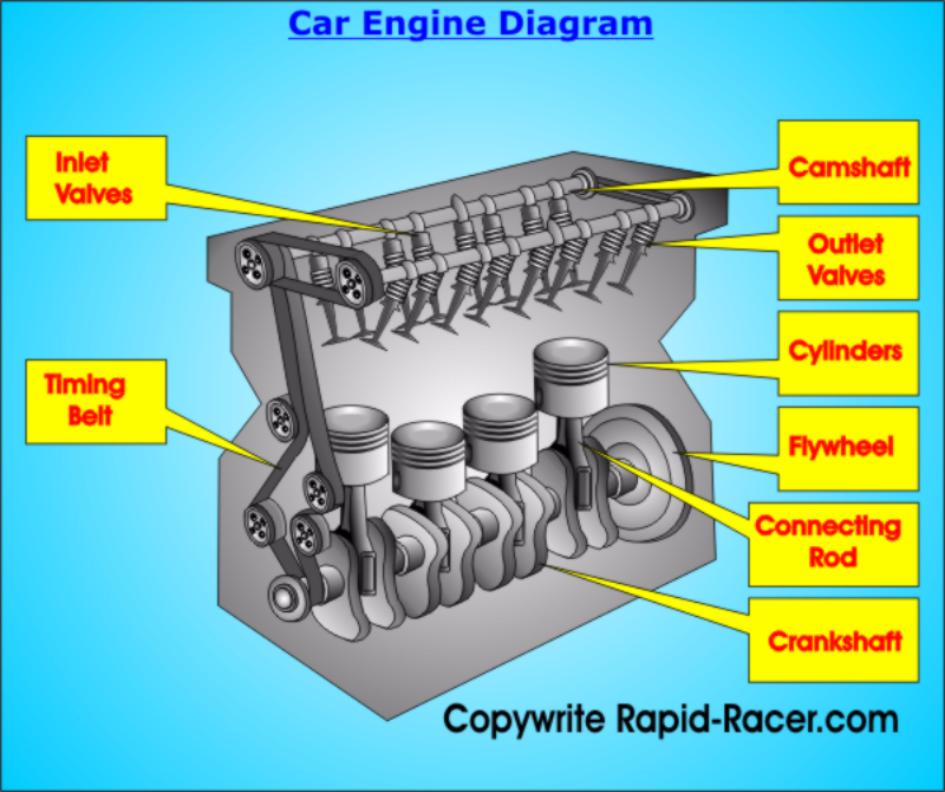 The intake and outlet ports open and close to allow air to be drawn into the cylinder and exhaust gases to be expelled- during the Intake and Exhaust stroke. We understand that the engine is effectively a device which sucks in air, compresses it, ignites it and then blows the air out again to creating power to the road wheels on the combustion stroke.

In terms of the performance gains possible, there are a vast multitude of different techniques and technologies we will cover in engine upgrades.

First of all lets get a understanding of the different types of engine layouts commonly found in cars today. As Engines can come in an array of different designs, including Straight, V Type, W Type, Boxer, Rotary Diesel, Hybrid, Electric and even Motorbike Car Engine. We will cover these all separately as we want to get the fundamentals of the engine covered in this section.

Inline engines have the cylinders arranged, one after the other, in a straight line. Almost all four cylinder engines are straight/ Inline engines and are considerably easier to build than an otherwise equivalent Boxer or V type engines. This is because the cylinder bank and crankshaft can be milled from a single metal casting and it requires fewer cylinder heads and camshafts.

This ultimately means lower production and maintenance costs. Also due to their smaller and more lightweight construction, this is the preferred Engine design for FF cars ( front wheel drive). The design can be extremely fuel efficient compared to V type, Boxer and Rotary engine designs.

There are some five and six cylinder Straight/ Inline design engines, which are mainly found in European cars from the likes of Audi and BMW for example.

Reasonable performance can be achieved with performance levels in the 2009 Ford Focus RS around 300 BHP. This is mostly due to Turbo Charging and boost pressure used, but it is common for a 2.0 Litre 16 Value inline 4 to produce 200 BHP plus in performance guises.

The engines are not generally thought to be as smooth as the V type and Boxer engine designs and the structure has it's limitations in terms of durability and strength. Inline engines can sometimes be a little rough in lower revs, but work well for smaller cars and do respond well to tuning with the common upgrade paths available. 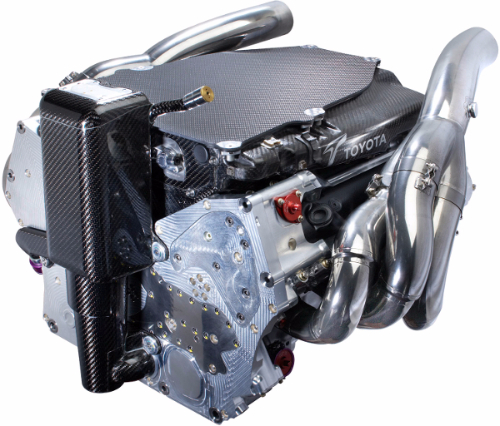 The V-type of engine has two rows of cylinders set normally at a ninety degree angle to each other. The main advantages of this include it's short length, great rigidity of the block, its heavy crankshaft for stability, and attractive low profile. This is a tried and tested engine design with huge performance potential. We normally seen designs come in a V6, V8, V10 and V12 configurations especially in motorsport applications.

In sports applications, having the engine as low to the floor as possible increases the car's handling characteristics, as it will naturally have a lower centre of gravity ( not on par with boxer engines for this but still very good). Also having a strong engine with built in rigidity can mean the difference in endurance races, making the V type engine design an ideal choice for Motorsport applications.

With this type of engine it is possible to have a very high compression ratios, without block distortion under extreme loads and it is not uncommon to see high revving applications with 19,000 rpm's.

This makes it a strong and robust design for high performance applications and has been used in F1 for instance. Also with it's resistance to torsional vibration, the engine characteristics produce a smooth and refined engine and can be found in many high end performance road cars.

Another attribute for this compact engine design is a shorter car length without losing passenger room. In 1914, Cadillac was the first company in the United States to use a V-8 engine in its cars. From there America has fallen in love with the V type engine and the 50's and 60's produced some of the best Muscle cars. 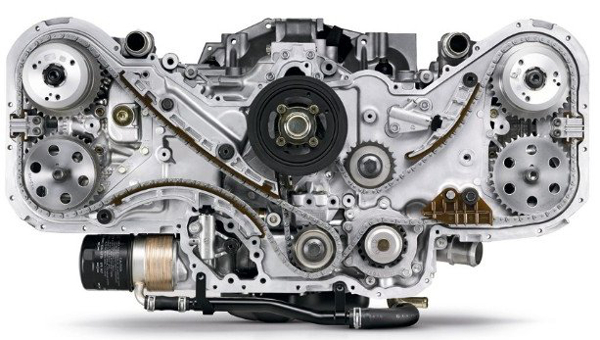 In 1896, Karl Benz invented the first internal combustion engine with it's horizontally opposed pistons. This Boxer or Flat engine as it is known, is an design with multiple pistons that all move in the horizontal plane. The most popular and significant layout has cylinders arranged in two banks on either side of a single crankshaft, generally known as "boxers". This is because the two pistons join together in the middle of TDC ( Top Dead Centre). This is similar to two boxers touching gloves at the beginning of a bout and is the origins of the name appointed to the engine design.

Flat engines have a lower center of gravity than any other common configuration, so vehicles using them should benefit from better stability and control during cornering. But they are also wider than more traditional configurations and the extra width causes problems fitting the engine into the engine bay of a front-engined car. Subaru have been producing AWD front engined cars for some time now, so where there's a will they is a way.

Boxer engines are one of only three cylinder layouts that have a natural dynamic balance; the others being the Straight/ Inline 6 cylinder and the V12 design. This makes for a smooth and harmonious engine at idle.

Boxer/ Flat engines tend to be nosier then other designs due to the lack of airboxes and other components in the engine bay. They have a engine characteristic of smoothness throughout the Rev range and when combined with a mounting position immediately ahead of the rear axle, offer a low center of gravity and largely neutral handling characteristics. 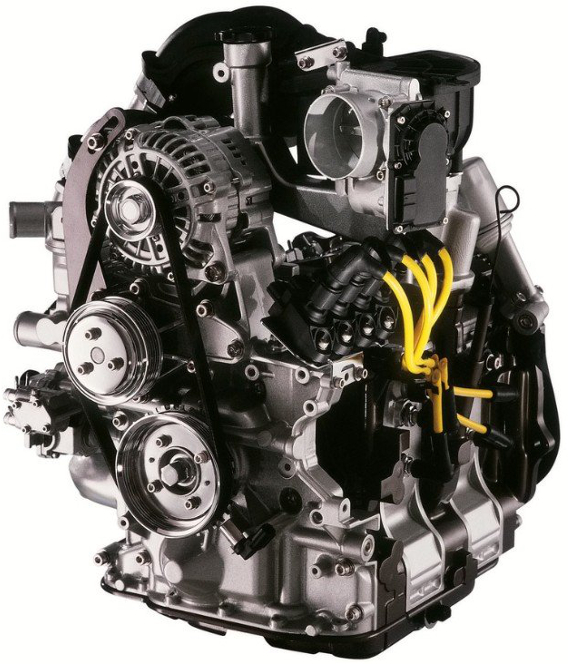 The Rotary or Wankel engine as it is know has no pistons, it uses rotors instead. This engine is small, compact and has a curved, oblong inner shape. Its central rotor turns in one direction only, but it produces all four OTTO strokes (intake, compression, power and exhaust) effectively as it rotates.

The only production car to still have a Rotary/ Wankel engine design in production today is the Masda RX-8 and previous RX-7 models.

The Rotary/ Wankel engine is limited by its inherent restriction on breathing capacity due to the need for the fuel/air mixture to be aspirated through the hollow crankshaft and crankcase, which directly affected its volumetric efficiency, also low torque levels are a known problem and the engine has design limitations. Turbocharging this engine is one of the easiest ways around these deficiencies and was seen in the RX-7.

The rotational forces of the mass of the Rotary/ Wankel engine's weight produce a powerful gyroscopic flywheel effect. This smooths out the power delivery and reduces vibration. Vibration had been such a serious problem on conventional piston engines that heavy flywheels had to be added to the overall engine design to help counteract the effects.

The cylinders themselves functioned as a flywheel, Rotary engines gained a substantial power-to-weight ratio advantage over more conventional engines. Another advantage was improved cooling, as the rotating cylinder block created its own fast-moving airflow, even at standstill.

Dispensing with separate cylinders, pistons, valves and crankshaft, the rotary engine applies power directly to the transmission. It's construction allows it to provide the power of a conventional engine that is twice its size and weight and that has twice as many parts.

The Rotary/ Wankel burns as much as 20% more fuel than the conventional engine and is potentially a higher polluter, but its small size allows the addition of emission-control parts more conveniently than does the piston engine.

The basic unit of the rotary engine is a large combustion chamber in the form of a pinched oval. Within this chamber all four functions of a piston take place simultaneously in the three pockets that are formed between the rotor and the chamber wall. Just as the addition of cylinders increases the horsepower of a piston-powered engine, so the addition of combustion chambers increases the power of a rotary engine. Larger cars may eventually use rotaries with three or four rotors.

Mazda have had numerous success with this design, especially with the RX-7 and RX-8 models. By adding a turbocharger as discussed previously, the torque deficiencies are some what over comed and also engine power greatly increased. This combined with the lower weight made a effective and competitive performance package. 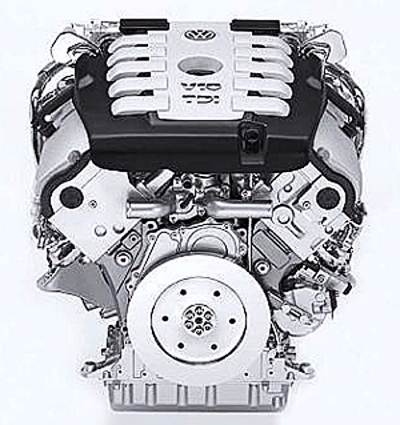 The Diesel engine was first invented by Rudolf Diesel, of German ethnicity born in Paris. Although quite similar in design to petrol internal combustion engines, Diesel engines use compression to ignite the compressed fuel to air mixture prior to injecting it into the combustion chamber, with out the need for spark plugs. Glow plugs may be present in the system to aid with cold starts, which heat the fuel and air mixture to aid in combustion- prior to the combustion chamber in some designs.

Diesels have had some success with racing series, but from an overall power to weight point of view, I assume petrol to be more competitive at this stage in time- as a larger engine needs to be deployed compared to a smaller petrol for similar overall BHP, but Diesels do produce more Torque especially when deployed with turbo charging.