A car's induction can be thought of as the lungs and mouth of the engine, it's job is to suck clean air into the engine combustion chamber. This air needs to be metered and measure to provide the ECU and its array of sensors, all the information which is required to operate effectively, including fuelling (in electronic fuel injection systems).

Normally car manufactures do a good job of ticking most of the boxes in terms of proving a clean, debris free supply of air to the engine, taking into consideration different environments and stock engine air flow requirements.

The problem sometimes arises where you gradually increase the performance of your engine and the standard airbox hinders airflow, which leads to less power potential being maximised. Due to emissions and noise level considerations, the air intake will not always be designed for pure performance in mind.

It is possible to release wasted horsepower potential by upgrading the induction system, this maybe regulated in some racing series and local laws in your country.

Induction systems may also have Forced Induction already in place, which will be either a Turbo or Supercharger, to aid in supplying the engine with even larger volumetric airflow capacities. We will cover these desperately.

The basic principle of more power from better intakes, revolves around the fact that the more air entering the system- can mean more fuel can be added for bigger explosive power. Also the air density and temperature have have an effect on engine power, with colder denser air being the benchmark to aim for in general terms of pure power. 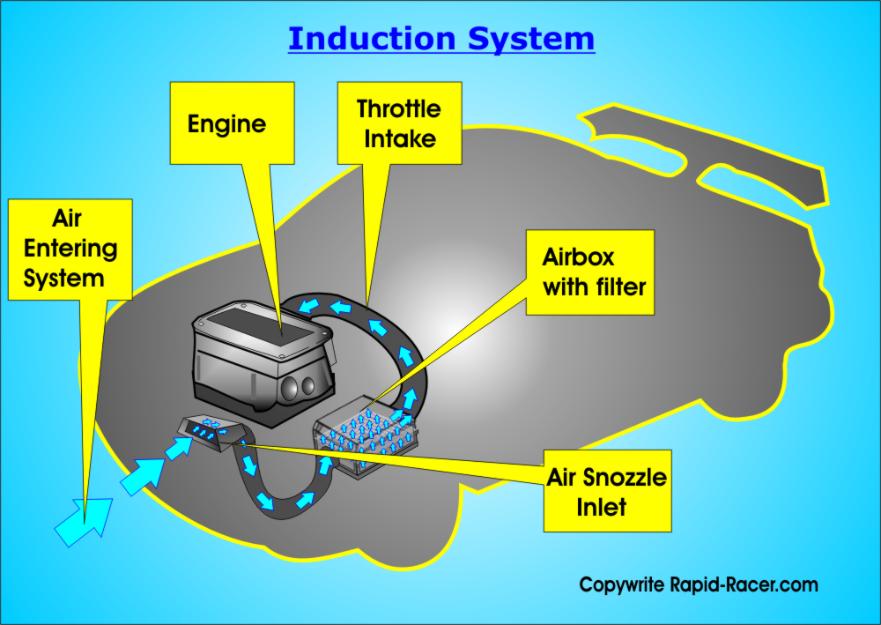 Natural aspirated engines rely on the internal pumping power of the engine in order to make power- as an engine is essentially a giant air pump in its fundamental principles. Due to the fact there is no forced induction is present, increases in pumping power can be had by addressing the first area of the cycle, the induction system or air intake components.

In most modern induction systems we have the following components present: 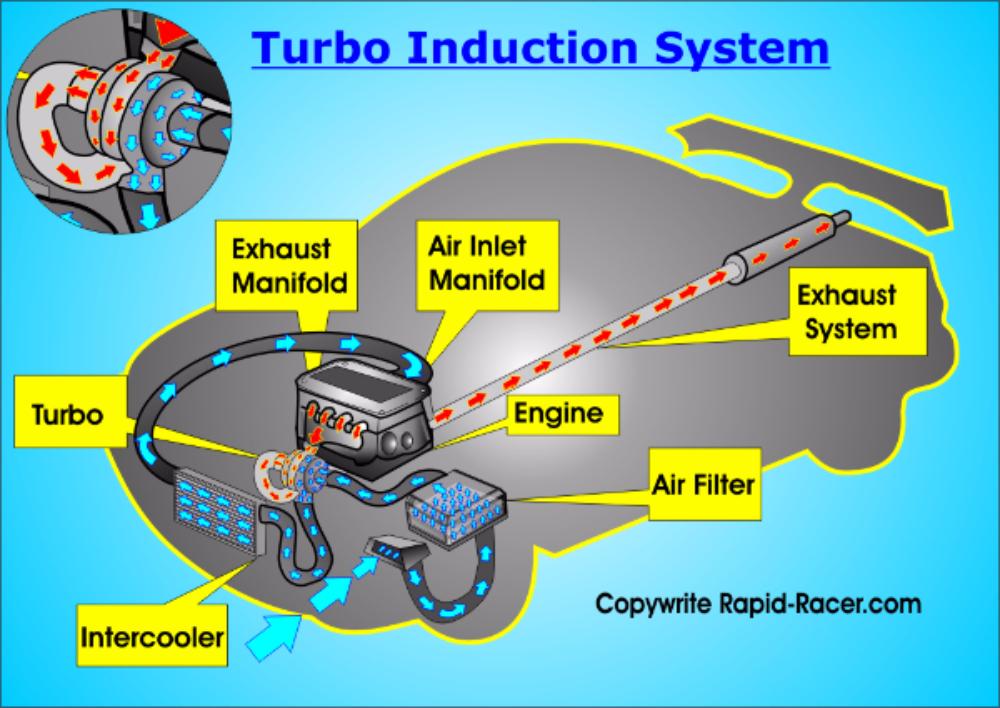 In order to make substantial power increases in engine output, without internal engine work- forced induction has been a relatively easy approach to achieve this, with both supercharging and turbo charging technologies being deployed with great effect.

With forced induction applications, we will have a slightly different set-up as follows:

Forced Induction is a term normally associated with turbo-chargers (turbo´s) and supercharged engines. The main aim of these devices is to increase engine power, engine efficiency and some times emissions, with minimal engine redesign and normally small weight gains.

Normally a set amount of fuel will yield a maximum amount of power, to increase power more fuel will need to be burnt in the engine. As a engine can normally only take in a set amount of air at normal atmospheric pressure, to raise power the air intake needs to be increased. Forced induction is basically a way of getting more compressed air into the combustion chamber.

Strengths and weaknesses vary depending on the type of forced Induction application used and the desired aims and goals trying to be achieved. But essentially the aim for both of these devices is to compress the air to higher then atmospheric levels, resulting in a higher oxygen levels.

Superchargers can come in a number of different designs and are mechanical driven units. These can be Belt, Direct Drive, Gear Drive, Chain Drive and Electrical Drive driven systems.

Essentially by using a certain amount of power to drive a compressor, gains in power can be achieved with minimum weight gains compared to increasing the size of the engine.

Also adding a Supercharger is more straight forward then a Turbocharger installation due to no engineering work needed to the exhaust system. Also service maintenance for these units are less extensive. Instant throttle response and the most cost effective increase in power are achieved with these units.

Also the Supercharger used will need engine power to actually run, for instants a standard 100 Bhp engine might produce 150 Bhp with a Supercharger installation. But the Supercharger might consume 25 Bhp to run, reducing in a Net 25Bhp gain. This results in higher fuel consumption and will only be effective where throttle response and power are the main considerations. Drag racing is a good example.

There are two types of units used commonly in most production cars Centrifugal and Positive Displacement Superchargers. 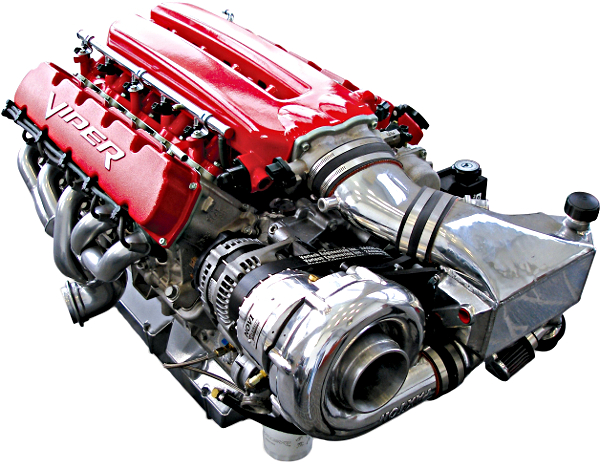 This type of Supercharger will result in more boost and power gains higher up in the engines Rpm range, resulting with maximum power at the top of the Rev range. Little to no power gains are likely to happen lower down the engine Rev range, so careful application will be required.

Fuel efficiency is not affected as much as in a Positive Displacement applications, due to the fact the unit doesn't come into effect until higher in the power band.

A centrifugal supercharger, could be viewed as a turbo-chargers connected with a belt to some extent, but of course being driven by the engine and not exhaust gases. 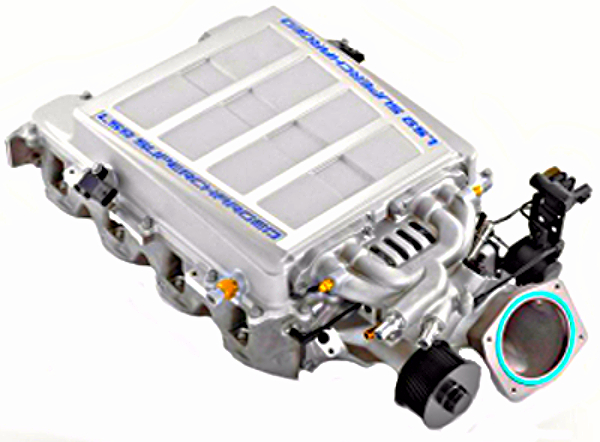 Positive Displacement Superchargers different from Centrifugal set ups, by delivering a more broad power distribution across the entire Engine Rev range. With the majority of power delivery in the lower to Mid range engine Rev range. Their is a more direct feel in terms of throttle response and no need to wait for any lag or spooling up.

Using engine torque generated from the rotational mass of the internal crank pulley to drive the Supercharger mechanically, this is connected to a air compressor. The Super-charger actually takes engine power to work, but produces an increase in power as a result.

Due to the fact a Supercharger is directly linked to the engine, power gains can be achieved through out the usable RPM range. Positive Displacement Supercharger will yield more efficiency lower down the Rev range compared to other types and designs. 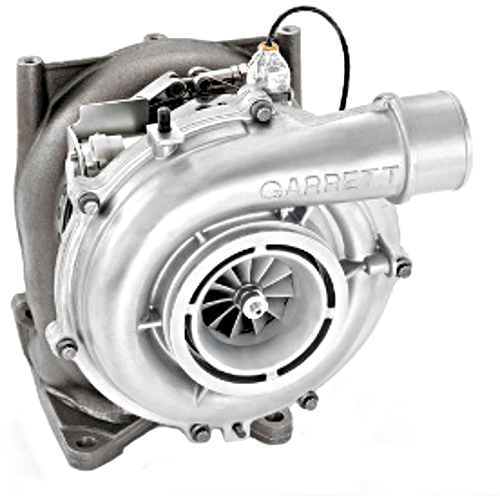 Another one of the methods to boost engine power is called a Turbocharger (turbo). It uses exhaust gases exiting the engine to drive a set of propeller fins or a turbine to increase volumetric air intake pressures. More air at a greater pressure equals more fuel being efficiently burnt and more power produced by the engine.

A turbocharger relies on the volume and velocity of exhaust gases to spool, or spin the turbine wheel and this is effectively more power being produced from otherwise wasted exhaust gas energy. The higher the gas flow, the more the air is compressed and larger power gains are achieved.

Maximum Turbo power can be achieved lower down the Engine Rpm range and depending on boost pressure and huge power gains are possible. The technology has proven Motorsport application both in F1 and WRC, with origins coming from the Aeronautical Industry, where power loses at higher altitude where required.

In the early automotive applications, huge Turbo lag was apparent (the time it takes for the unit to start accelerating). With the use of advance ECU's (Engine Control Unit) and anti-lag set ups, this is becoming a thing of the past. Creating a smoother power delivery, more akin to naturally aspirated counterparts.

Another great reason to turbo charge a vehicle rather then fitting a larger engine in the first place, is the fact that from a weight point of view, smaller displacement engines can be used. Apart from weight savings, we are seeing more and more eco-friendly cars adopt this technology as a way to decrease engine size, while retaining engine power outputs.